Some nerve cells produce a chemical called serotonin, which sends signals between these same cells in the brain and throughout the body. Despite it being known for being present in the brain, the digestive system is where most of the serotonin in the body can be found.

Serotonin is made from the amino acid tryptophan. You can support the serotonin levels in your body by consuming foods that are rich in tryptophan such as red meat, cheese, and nuts.

Serotonin is associated with memory and mood regulation, but serotonin also plays a crucial role in other bodily processes. [1] For instance, almost all the serotonin in our bodies is produced by our intestines, and this neurotransmitter is needed for healthy digestion.[2]

Serotonin plays an important role in many functions of the body, from the digestion of food in your gut to the regulation of mood in your brain.

Serotonin plays an important role in the body’s process of letting you know that you’re full when you eat, digesting the food you eat, and moving the remaining contents to be expelled from the body.

Serotonin also has another role in your gut.[4] If you eat something that is toxic or irritating, your gut will respond by creating more serotonin. This additional serotonin will then speed up the rate at which the unwanted food passes through your body allowing it to be expelled sooner than it otherwise would.

Your response is the reason why the heightened amount of serotonin can make you can feel sickly, and why drugs that target certain receptors of serotonin can be utilized to ease vomiting and nausea.[5]

One of the most important roles that serotonin has in the body is its effect on the brain. Serotonin is well-known as the “feel-good” chemical of the body since it helps regulate your mood.[6]

The effect that this neurotransmitter has on your mood is also a reason why it’s a target of medications that are used to treat anxiety, depression, and other mood disorders.[7] For example, SSRIs, or selective serotonin reuptake inhibitors, are a type of antidepressant that increase the levels of serotonin to treat depression. 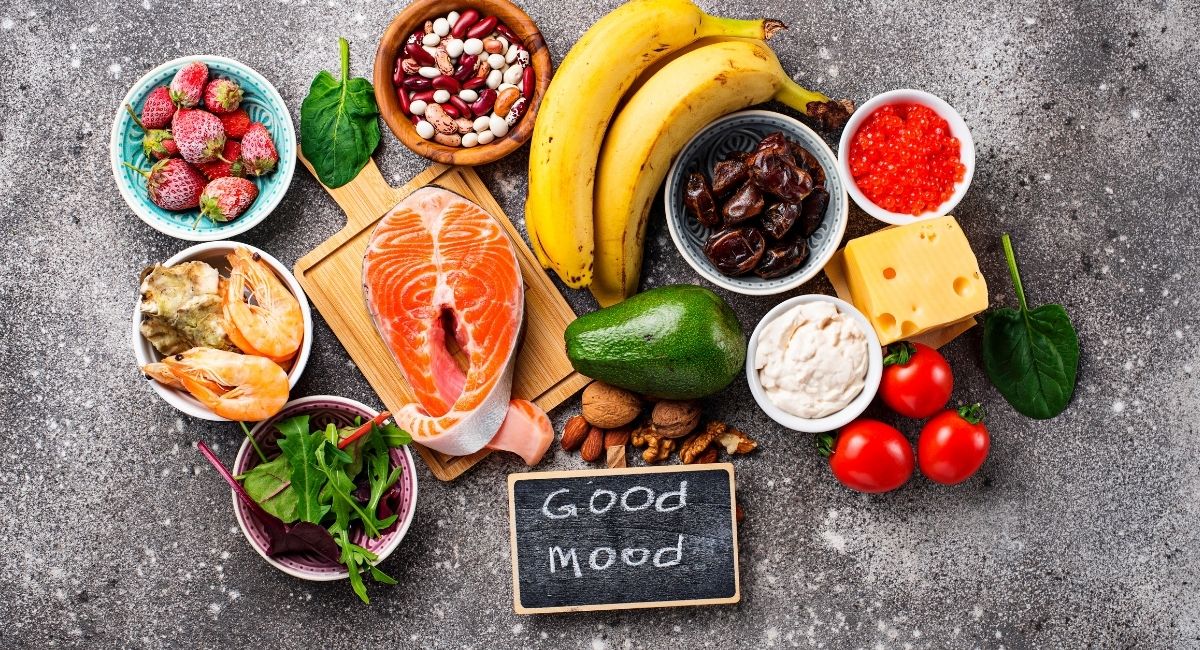 The role that serotonin has in terms of sleep is being researched by many scientists, and it is believed that serotonin influences how well, and when you sleep.[8] It is important to note that these things are not regulated only by serotonin, since other neurotransmitters also play a role in these processes, such as melatonin.

In order to sleep properly, the hormone melatonin is also important.[9] Not having a sufficient amount of melatonin in your body might influence the quality of your sleep and the pattern of your sleep cycle.

Specific areas in your brain control when you wake up, what your sleep patterns are, and when you fall asleep. There are receptors[10] for serotonin in these parts that are in charge of regulating your sleeping patterns.

Besides acting as a neurotransmitter, serotonin also has several functions when it comes to other organs in the body. Serotonin actually plays an important role in maintaining bone health, but the extent and the nature of this relationship are still not very clear and human studies that address the effect that serotonin has on our bones are limited.

The strength of your bones, also known as bone density, can be influenced by the levels of serotonin in your body. There are studies that state that conditions like osteoporosis and lower bone density are connected with a high amount of serotonin in the gut.

Studies also state that selective serotonin reuptake inhibitors medications are connected with  a reduced density of minerals in the bones. [11] Your bones are more likely to fracture if you have a lower bone density.

However, don’t discontinue taking your medication if you’re worried that the antidepressants you’re consuming can have an effect on the density of your bones. Instead, make sure that you talk to your health provider about additional factors that might put you at risk, such as smoking or having osteoporosis in your family.

If you have some kind of damage to your tissue, the wound is healed thanks to the platelet cells in your blood that release serotonin.[12] Arterioles or the tiny arteries that can be found in your circulatory system can narrow as a result of increased levels of serotonin.

The flow of blood will slow down when the arterioles get smaller. Vasoconstriction, or the narrowing of the arterioles, and the slowed flow of blood, are two elements of blood clotting, and blot clotting is extremely important when it comes to healing wounds.

Serotonin might have an effect on the intensity and frequency of the sexual desires that you experience. The libido can be affected by certain antidepressants used to increase the level of serotonin. The reason for this is because higher levels of serotonin are connected with a reduction in sexual desire. [13]

The influence that serotonin has on libido is also connected with the relationship that this neurotransmitter has with another neurotransmitter called dopamine. For instance, a study conducted in 2017 has shown that women that had HSDD, also known as hypoactive sexual desire disorder, showed that the signs of the disorder were connected with reduced activity of dopamine and increased activity of serotonin. [14]

Causes of Low Levels of Serotonin

Depression is often connected with serotonin, as well as other disorders. However, for these disorders to occur there has to be an additional cause. In order for depression to occur, just having low levels of serotonin isn’t enough.[15] Low levels of serotonin can contribute to issues with digestion, sleep, and mood among other bodily processes.

Even though there are many reasons for low serotonin levels, it typically happens on the following grounds: you either don’t have enough serotonin or you’re inefficiently using the serotonin that you do have.

In the former case, you’re having low serotonin levels because you aren’t producing a sufficient amount. There can be many reasons for this including vitamin and other nutrient deficiencies.

For instance, deficiencies in vitamin D and B6 have been connected with lower serotonin levels. A crucial amino acid called tryptophan is involved in the production of serotonin, and this amino acid needs to be acquired through your diet.[17]

A synapse is a small gap between two cells used for the communication of messages between those cells. Thousands of synapses can be contained in a single neuron. Synapses allow for information to be transferred by neurons that interconnect forming the circuitry on which neural processing is dependent. Low levels of synaptic serotonin can cause depressive symptoms.

How Can Serotonin Levels Be Increased?

The role of serotonin in depression is a bit more complicated than just having an insufficient amount of serotonin, however, it is still thought to play an important role in the development of the condition.

The communication between brain cells seems to be improved by raising the amount of serotonin, which as a result reduces the depression symptoms and lifts the mood. For this reason, in order to reduce the symptoms of depression and other related mood disorders, prescription antidepressant medications are used.

Besides prescription antidepressant medications, you can also increase your levels of serotonin naturally, by increasing the amount of sunlight and incorporating more of certain foods into your diet.

Even though serotonin is contained in many foods, in order for the neurotransmitter to be produced, you need other things such as vitamin D, omega-3 fatty acids, vitamin B6, and tryptophan. 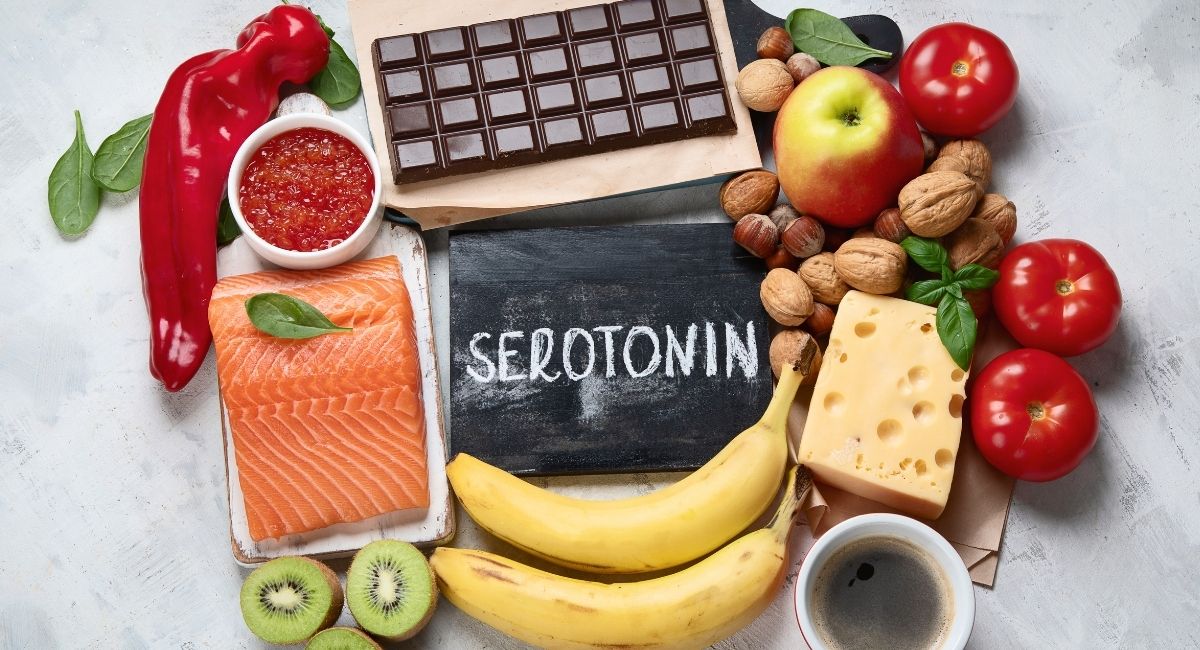 These nutrients can be found in the following foods:

The gut bacteria will be kept healthy by eating a diet full of fruits and veggies and that is high in fiber. Adequate serotonin levels are connected with your intestines, more precisely having a good amount of bacteria that is considered “friendly” in them. In addition, serotonin levels can be boosted by regular physical activity, and this is especially true for aerobic exercise. [18]

However, exercising regularly offers many other benefits, since it helps with weight management and as a result helps reduce the symptoms associated with mood disorders. It also improves strength and endurance, and promotes cardiovascular health. It is recommended by The American Heart Association that individuals over 18 years of age get at least 150 minutes of exercise per week.

Abnormally low levels of the neurotransmitter serotonin are associated with depression and other disorders. Even though low serotonin levels can cause some serious issues, it is important to note that high levels of serotonin can also cause problems.

We hope that the guide we’ve put together will help you navigate through this topic. If you’re concerned about your serotonin levels, make sure that you talk with your healthcare provider or doctor.

[6] Jenkins TA, Nguyen JC, Polglaze KE, Bertrand PP. Influence of tryptophan and serotonin on mood and cognition with a possible role of the gut-brain axis. Nutrients., 2016

[15] Cowen PJ, Browning M. What has serotonin to do with depression? World Psychiatry. 2015;

[16] Jenkins TA, Nguyen JC, Polglaze KE, Bertrand PP. Influence of tryptophan and serotonin on mood and cognition with a possible role of the gut-brain axis. Nutrients. 2016